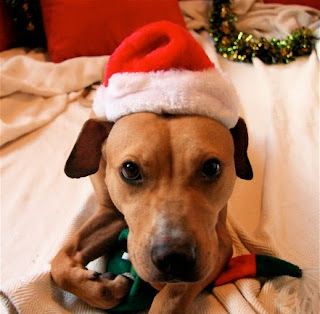 So Christmas is almost here, and Marvin found his forever home last week with a lovely couple called Jen and Michael in Hoboken. How I cried when he left though! They've very sweetly kept me up to date and it sounds like they are all in love with each other which is such a nice Christmas story for Marvin, and for them!

He is such a good little puppy, and even the scavenging waned somewhat by the time he left. No surprise – when he arrived he was just 15 pounds, but when Jen and Michael took him to the vets this week they reported Marv now weighs a whopping 46 pounds! He is going to be a big one!
Talking of big ones, Maria, Wilson's now owner emailed some photos of him. I barely recognised him he has grown so big! And Maria and her family have also adopted another puppy rottweiler called Rocky who is about the same size Wilson was when he was adopted. They look like best buddies.

Here is a photo of Peanut. I fostered her last Christmas, and is actually how I ended up meeting Lee Charles Kelley. She was the most popular gal on the block, but she had the energy for six dogs when outside so I took her to see Lee when he was giving out training tips at Whiskers Pet Store.

Her owner of a year now, Angela, in Brooklyn dropped me an email this week to say how she couldn't have wished for a better dog than Peanut, and photo of Peanut looking very pleased with some shoes she had just eaten! Ahh, what is it with dogs and shoes? I lost two pairs to Marvin. Thank God it's Christmas.