THE ALIEN HAS LANDED 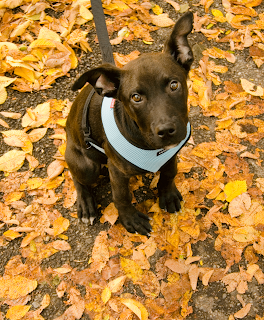 Marvin has arrived! An adorable energetic little ball of hormones with an uncontrollable bladder to boot, we named him Marvin after Marvin the Martian as he looks so alien with his webbed-like paws, bat ears and turned-up nose.
Marvin is four-months old, with maybe some labrador retriever in him, but certainly some sort of staffordshire terrier. He's a beautiful chocolate colour and has big doleful eyes so is certain to be adopted soon.

Marvin was left tied up to the gates of the Brooklyn Shelter so I don't know what his background is (other than possibly coming from outer space!). I'd guess he was kept somewhere confined. He likes to sleep in a different room on his own, and initially dragged his treats into the bathroom to chew. His nails are very long too which suggests he hasn't been outside a lot. It's interesting to compare him to Sammy and illustrates what damage a few months can do. While Sammy at 11-months had never been outside and even with a week of gentle coaxing was still no better, Marvin, just seven months younger, was nervous the first few times but now will run down the stairs into the yard and cannot wait to get out and explore – so much so we've had to put a gate up!He's a little on the skinny side and is more excitable than a less stressed dog would be but I am hopeful that Marvin hasn't been physically abused. He's a little handshy but will bound up to everyone he meets on the street to say hi and seems very happy!. He loves playing and chasing balls and is already much more cuddly after just two days. He's also more sure of himself in the dogrun than Wilson was at 3.5 months, although still runs for cover if play gets too much. It's so interesting looking at the differences between the two. Wilson was all about chewing trouser legs. Marvin is all about chewing hands!

Having only been neutered on Tuesday, Marvin is a bundle of hormones still and is having to be pulled off legs constantly! I gather this is usually the case for up to two weeks after neutering. And can only be aggravated by the amount of stress he has had recently.

But boy can Marvin pee! He's a constant hose - mainly because he gets excited about EVERYTHING! Infact, he's just peed again so I'd better go clean up!

Posted by Dogs and stuff at 1:56 PM No comments:

FROM FOSTERED TO FAMOUS 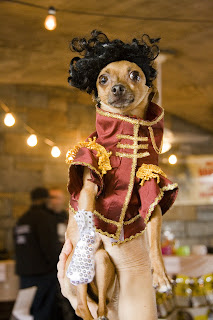 So Sammy left on Saturday. It was heartbreaking putting him into the van where he joined another rescue dog, Chance, who was also heading to the Sanctuary. Chance suffered from terrible separation anxiety and had to be with other dogs.
Poor Sammy looked so scared as we piled him into his crate although we tried to do it as calmly and happily as we could muster so as not to scare him further. He's still on his journey and will be arriving in Florida tomorrow, so I look forward to hearing how he is. I miss his big old mush face and I still feel sad that with just the right environment and time, Sammy could have found his way to finding a wonderful family.
The charity event for Posh Pets Rescue at the Boat Basin was Saturday afternoon, and despite the rain, people came with their adopted dogs and foster dogs. It was comforting to hear stories of success. A lot of these dogs have come a long way. Eli, here dressed as Michael Jackson for the costume competition, has gone from being rescued to becoming famous! He was adopted by Karen Biehl as a puppy having had a prior series of owners, and became the face of the Milkbone puppy boxes. He's now quite a celebrity in New York and has appeared on fashion runways and has had a few cameos in films. He even has his own website!

In total, the event raised $7,500. That equates to almost a year's worth of emergency overnight boarding fees as dogs await a foster or permanent home. Or it could send seven dogs that are unadoptable to the sanctuary. It's a small amount of money but it will help many dogs.

After the emotional time of having Sammy, and having thoroughly scrubbed the floors after his departure, we decided to take a break from fostering. But we always say that. Sure enough, Linda called today from the shelter with a four-month old Labrador puppy in need of an urgent home.....What could we say? He's being neutered tomorrow and will be with us by Wednesday. With Halloween next weekend, and inspired by Eli and the other dogs in outfits from Saturday, I'm already wondering if maybe I should get him a costume.... 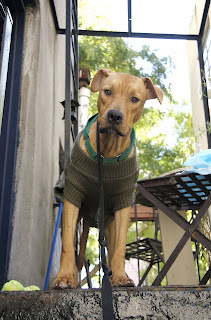 I suppose it was inevitable that at some stage during the fostering process we would have a dog that needed rehabilitating to such a degree that in the end we would be defeated. And in the case of Sammy, foster number 13, it is sadly the case. Sammy is an 11-month Staffordshire/ Ridgeback mix with big gangly legs and lots of goofy kisses. He arrived at the shelter at five months of age with two other puppies having been taken out of a dog-fighting ring where they had been used as bait. The two other puppies were sadly beyond help having been so psychologically damaged from their ordeal and were put to sleep, but Sammy passed his tests with flying colours. He was cleaned up and transferred to a boarders where he was socialised with dogs, but, for whatever reason, remained there for six months. About three weeks ago, he started to lose a scary amount of weight – presumably from depression – so I agreed to have him come stay with us to fatten him up and introduce him to family life.

When I met him at the boarders he bounded over and jumped up and I had the highest hopes that we would be able to fix up this big oaf with love and get him ready to be adopted with time. But having spent his whole short life in a crate had taken its toll. The first day with us he was at a loss. Our tiny New York apartment must have seemed enormous and bewildering to him, and reflections of himself in the mirror, window and even oven door sent him into fits of barking. Sammy had also never had a bed before, so every bed was regarded as a bathroom, and the thought of lying down and settling was beyond him. But these are hurdles that one expects from traumatised dogs, and not ones that cannot be fixed with time and love. After a few days, he was soon a permanent fixture on his comfortable bed where he could rest his bony body.

But his fear beyond the apartment increased over the week. Sammy refused to go outside. Here he is in the photo remaining very firmly on our door step but venturing no further even with the aid of chicken, toys and excited voices.  For the past week we have been carrying him out onto the streets where his fear increases tenfold. The happy  and calm dog he has now managed to become in the apartment is gone in the big wide world. He is terrified of people, noises and is even a little fearful of other dogs now. He cannot bear to be too far from the front door and we have had to come up with all sorts of schemes like carrying him several blocks away so he becomes disoriented just to be able to let him relieve himself and then run home for exercise.

As he has started to unwind, his fears have become more pronounced. Men are terrifying to him. As are any visitors to the apartment. I have used exercises from Lee Charles Kelley and Kevin Behan to try and help him but it became clear that our set up here was not enough. Sammy needs a foster family with a big yard somewhere quiet, with perhaps some other dogs so he can take his time becoming acclimatised to being outdoors. Above all Sammy needs probably months of training before he can be adoptable. Rushing him into being on the streets would be detrimental to him. It is just too much for him to take in so soon, and it became clear that even with all the love in the world, staying with us in our three-storey high apartment in a busy part of the city is not going to help him. Without exercise he will become bored and frustrated.

But fosters with a yard, and the time to let him learn slowly do not come easy in New York City. And trainers who can give months to a rescue dog cost more money than a charity can afford. After much deliberation with Posh Pets Rescue, the hard decision was made to transfer Sammy to a sanctuary in Florida where he can live out his long life ahead of him cared for professionally and with a big field to play in with other dogs.

As wonderful as the sanctuary is and for all its good work, it is so sad to have to give up on a dog that has so much love to give to those he feels comfortable with. Sammy will greet me every morning by jumping up to kiss me on the nose and tell me it is time for breakfast. He loves to lounge on my lap while  I'm working and he loves to play tug and has even started to fetch balls. It's heartbreaking to think that with just a few months and money he would probably be ready to be with a family.

On a positive note, I like to think that his time with us has helped him deal a little better with space. We've also fed him up so that he has put on several pounds which will provide a cushion for the long and stressful journey he is about to take down to Florida.

While it is not an ideal situation, it is a relief that places like the sanctuary exist so that dogs who are rescued but who cannot be placed with a family, will still receive love, food and places to play. They are a true blessing.

And he has managed to have one final New York adventure! Today he escaped the vets, and after two hours with police on motorbikes and in cars he was tracked down on the FDR highway on the east side of Manhattan! He has now been renamed Sammy FDR.

He leaves us Saturday when Posh Pets Rescue holds its annual fundraiser. Let's hope that enough money is raised so that other dogs like Sammy will be able to have the training and environment they need to overcome their fears.