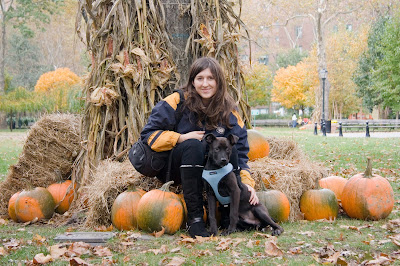 Almost a week on and Marvin is doing great! The humping has calmed down, and only now on very excitable occasions might he accidentally pee inside. He's a gentle and happy soul who does what he is told to do with a wagging tail. He plays with his toys, fetches balls, won't jump on the sofa or bed (unless we go out..), and chews only what he should (okay.. I lost a pair of training shoes to him on day two, but..), and he's very warm and friendly with people on the street.

He's a little unsure at the dog run still but has been in a couple of situations where he has happily wrestled nicely with another dog of his size. Unfortunately this morning a shitzu got out of bed the wrong side and took her mood out on Marvin, so that has set us back today, but he's definitely getting there. And he so loves the outdoors, I can take him anywhere. Here we are in Stuyvesant Town on Halloween.

He's still a little thinner than I would like, even though he is getting three mugs of puppy food, a breast of chicken and countless organic doggie treats and cheese cubes a day. I've bought some doggy fish oils to go in his food now as I noticed his coat is quite dry. Puppies cost a pretty penny!

I received an email today from a lobbying/rescue group in California that is actually pushing for pet owners to be granted tax exemptions on part of their annual pet-related outgoings. Because of the recession, an increasing number of pet owners have surrendered their animals as they simply cannot afford them. California's shelter numbers are up 12% since the end of 2007, for example.The ASPCA estimates the number of dogs and cats to be dropped off at shelters to have been as many as 8 million in 2008, and only 25% to 50% of those animals end up rehomed.

The HAPPY Bill would allow pet owners to deduct up to $3,500 of pet-related expenses a year from their tax returns and may help to keep owners and their pets together when the going gets tough. Here's the website: www.petexemption.com