THE BENEFITS OF HAVING A DOG 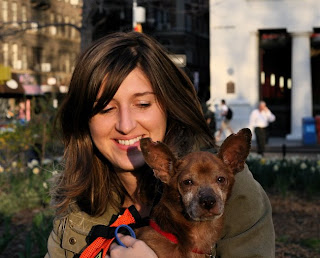 Wilson got adopted today. I'm sad to see him go but the family that has adopted him is so wonderful I can only be happy for them and him. The couple live in New Jersey with a big yard, and have four children between 5 and 12 who showered him with affection when they came to visit. He will be in heaven with grass to roll in, and children to play with. And talk about devotion - the family says they will take him on every holiday. Their last dog, also a rottweiler at 170 pounds! who passed away a few weeks back, would sit on the sofa with them, pillow under his head, and blanket on top. They have puppy neighbours too, so it is everything I could have wished for for the little guy. From the streets of Harlem on his own three weeks ago, Wilson now has a huge loving family. A very happy tale.

I wanted to share something I read recently in a book called 59 seconds by Professor Richard Wiseman. Those with dogs know only too well the benefits of having a canine friend but Professor Wiseman has researched scientific evidence to prove that having a dog is truly good for us. Karen Allen of the University of New York at Buffalo assembled a group of city stockbrokers suffering from hypertension and randomly divided them into two groups – one of which was given a dog to look after. After six months, the blood pressure of those that were assigned dogs was significantly lower than the group without. Dogs also proved more effective in alleviating mental stress than one of the most commonly used drugs to treat hypertension.

Wiseman goes on to discuss several theories as to why this may be. Arguments being that the exercise associated with walking dogs have a physical and psychological benefit. Another is that dogs act as the ultimate "non-judgmental friend" like a devoted therapist. An alternative is that touching and stroking a dog has a calming benefit. But the biggest argument made is that dogs make people sociable - by talking with other dog owners in the park, or being stopped by strangers on the street who want to pet your dog. Says Wiseman: "As spending time with other people is a major source of happiness and health, dogs' inadvertent but effective ability to bring people together plays a major role in promoting the well-being of their owners". So there we have it. As proven by scientists, we should all have a dog in our lives.

Here's a photo of me with Brian - foster number 1 – an old chihuahua that had been set upon by rats. That was a year and a half ago. Am I less stressed now than pre-Brian? Hmm, I'm not so sure. But I do have a lot more friends.